While describing the mutations in visual terms is helpful - for the avid breeder, understanding the genetics is far more important. This is where you can determine how to pair your birds to produce desired offspring or how to determine your pairs' full genetics after breeding by evaluating the produced offspring.

I haven't found there to be a lot of 'lay' information on the internet that is easily understandable, and sometimes, the information I have found is downright wrong, so I decided to write up what I've determined over the course of breeding these little beauties myself.

The information below is MY OWN. If you feel that it is incorrect, I welcome you to communicate directly with me so that perhaps we can produce some decent educational material for other breeders to reference. That said - any effort to share this information as one's own without my express consent will be considered theft of intellectual property. 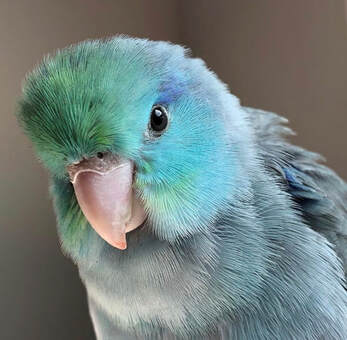 Turquoise Male
On most websites I've seen the Turquoise gene described as "Incomplete Dominant" which is not accurate. "Incomplete Dominance" describes a scenario where two genes blend cohesively together to produce a single phenotype that is a combination/blending of the original two. An example of an Incomplete Dominant mutation in Parrotlets is the Dark Factor mutation.

Therefore - if Turquoise was "Incomplete Dominant", it would have to be able to represent itself as it's own allele and it does not seem to do this. If it could, you would see people producing Turquoise birds out of visually Green and that has never happened before.

Turquoise appears to be an allele to the blue mutation. Turquoise birds will only exist where a bird is genetically blue and also possesses at least one copy of this Turquoise allele.

It's important to note here that the 't' vs 'T' notation is simply to indicate whether the Turquoise allele is present within the genetics of the bird. It doesn't relate to anything in so far as recessive or dominant. Think of the capital 'T' as the allele being present, and lower case as not present.

When you bring the American mutation into the equation, you're introducing another mutation to the mix - so it looks a little confusing, but hang in there!

Blue Pied Female x Turquoise Male
Offspring produced include Blue Pied, Blue, and Turquoise. I am going to ignore the Pied aspect of the female for this illustration as it’s irrelevant to the Turquoise genetics.

The ideal next step would be to pair the blue offspring from the above pair, to a blue offspring produced from a similar pairing, and see if any Turquoise offspring result. Basically - can you produce a Turquoise baby from two visually blue birds. My theory is no - and I don't know that I have ever seen anyone who has. But again, more test breeding has to take place first, and this is obviously a lengthy process making sure that genetics of birds involved are known or understood and there are no potential surprises.
​Turquoise Female x Turquoise Male
Offspring produced included Turquoise and one Blue Female. This was a pair bred by someone else who provided these results in the offspring.

I would also like to note that when it comes to extrapolating the above onto other mutations that exist, everything operates the same way, you'd just be attaching the additional genes for the additional mutations onto the genotype of the bird.