A Guide to Parrotlet Mutations

Green is the wild-type form of the Parrotlet. Males and Females are both a vibrant emerald green with blue spectacles (the line you see behind the eye). Males have a richly colored cobalt rump and cobalt colored primary and secondary flight feathers and under-coverts. Females have some hint of blue on their rump but lack the blue color throughout the wing. Below is a detailed gallery of Green babies at various stages of development.
​
​All photos belong to me unless otherwise stated and may not be used anywhere without my written permission.

Blue is a recessive mutation resulting in a bird being unable to produce carotene pigments. What's leftover is structural blue color, resulting in a bird that is visually blue in color. You can think of it this way: Blue + Yellow = Green (the normal color of a Parrotlet). The blue mutation is inhibiting the carotene pathway production, meaning it can no longer produce pigments associated with carotene, so you're left with a bird that can only produce structural blue color as a result.
​
​Being recessive means that to produce visually blue birds, both parent birds must carry at least one copy of the recessive blue gene.

Turquoise birds visually look like an intermediate color between green and blue. You will always know if you have a Turquoise vs Blue if your bird has a greenish blue mask (blue birds will have blue masks with no hint of green).
There are several websites with misinformation about the inheritance pattern of Turquoise. Turquoise is an allele of Blue and is Dominant to Blue and Recessive to Green ("Incomplete Dominant," if you will). I explain it in detail here.
​Below is a detailed gallery of Turquoise babies at various stages of development.

The American mutation is a recessive gene affecting the wild-type bird where structural blue color is interrupted, leaving a dark eyed bird that is visually yellow in color if the base color is green. It's interesting to note that the structural blue pigment is only affected in the body color feathers and NOT the sexually-dimorphic areas of the bird, suggesting the pathway isn't completely incapacitated but that in some metabolic pathways it has at least been disrupted. In American birds (where no Ino is inherited) you will *always* see a white rachis in the primary flight feathers. The rachis is the center feather shaft. If you have a Marble bird that is also American, the rachis will be white right up to about 1/2 inch before the end of the feather which will be characteristically gray in color as seen in all Marble birds. It's interesting to note as well that in pied birds, pure pied areas of the primary feathers in Pied series birds will also have a white rachis matching up with the pied sections of the feather.

A green bird that possesses two copies of the American mutation. The result is a bird that appears yellow in color. Some look almost neon. ​​

A blue bird that inherits both recessive copies of the American gene will be called an "American White" bird and will appear powdery blue in color (left). If paired to a normal green bird that carries no other mutations, the babies produced would be Green split for Blue and "American."
The image below depicts the follicle difference between a Blue (left) and an American White baby (right). Notice darker follicles and edging on the blue baby in comparison. It's notable however, that heavily pied blue babies will appear very similar to American White as far as follicle color and impression prior to pinning out. 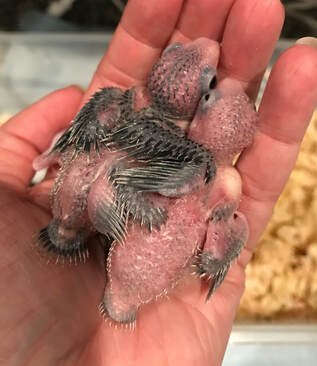 Pied is a dominant trait that can be a little tricky to grasp because there is no 'recessive' counterpart. For instance - Green is the dominant form, and introducing two copies of the recessive American gene produces a visually Yellow bird. Whereas many of the parrotlet mutations are recessive genes that require a bird to possess both copies for them to phenotypically (visually) express the color, the Pied gene is a single acting gene on the body feathers of the bird. Meaning a single copy present will produce pied feathers - the degree to which is highly variable and not all that predictable.

In a green bird, pied feathers will be yellow. In a blue bird, the pied feathers will be white (since the bird cannot produce lutein, the pigment responsible for yellow color). In a turquoise bird, since it's an intermediate color, the bird can have both yellow AND white feathers. In Turquoise pied birds, any pied feathers in the forehead will always be yellow due to Turquoise birds having Turquoise Foreheads. For any pied birds, pure pied primary flight feathers will have a white rachis, similar to American birds. The difference will be in the overall body color. You can see examples of this in some of the wing photos below. 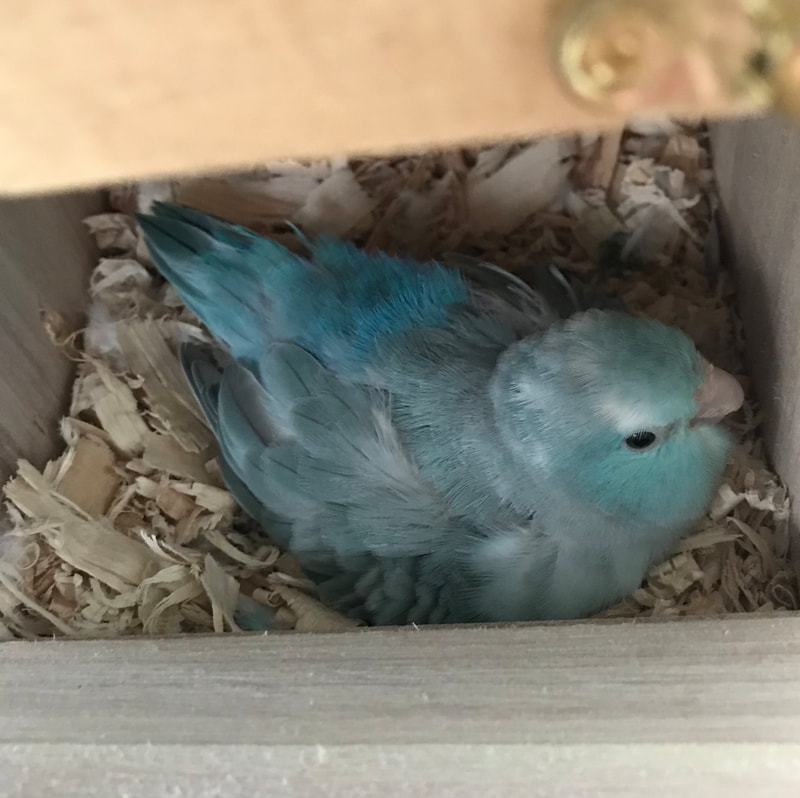 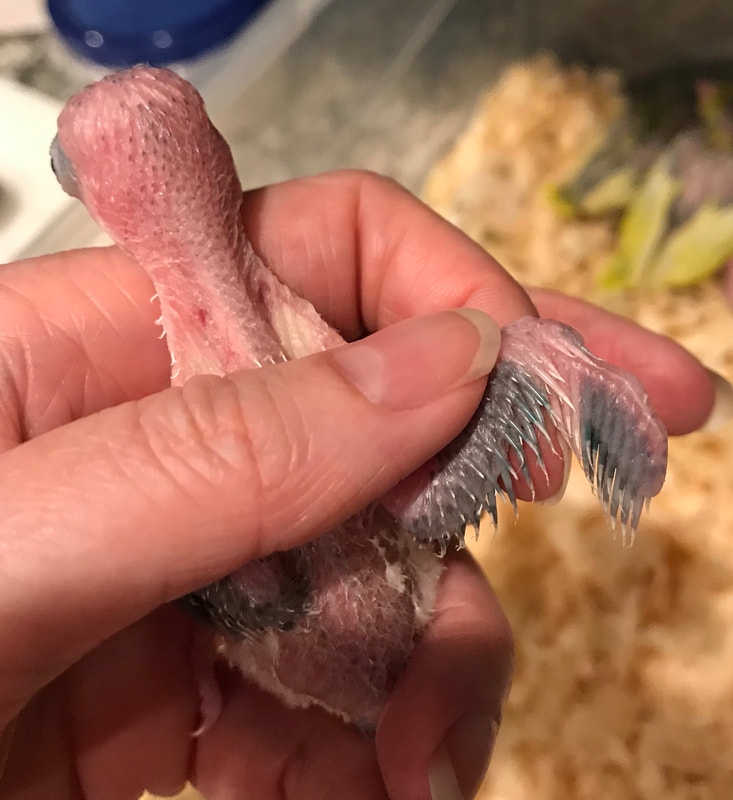 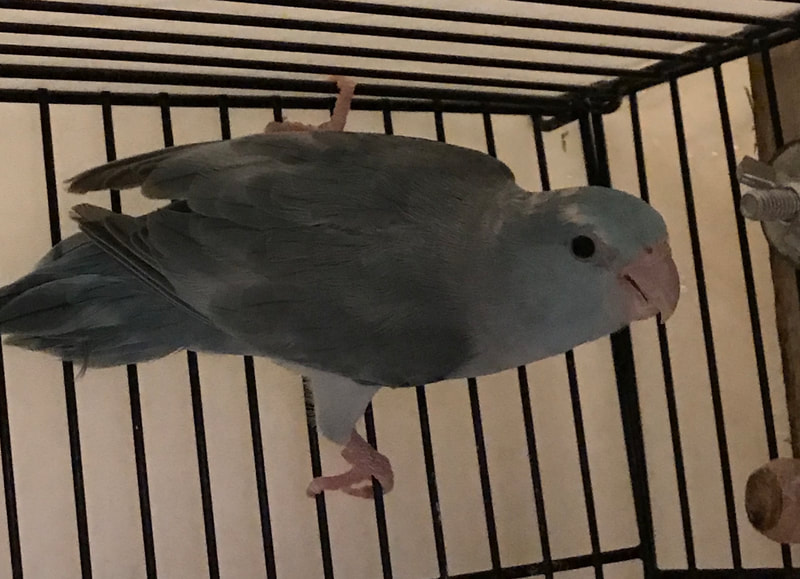 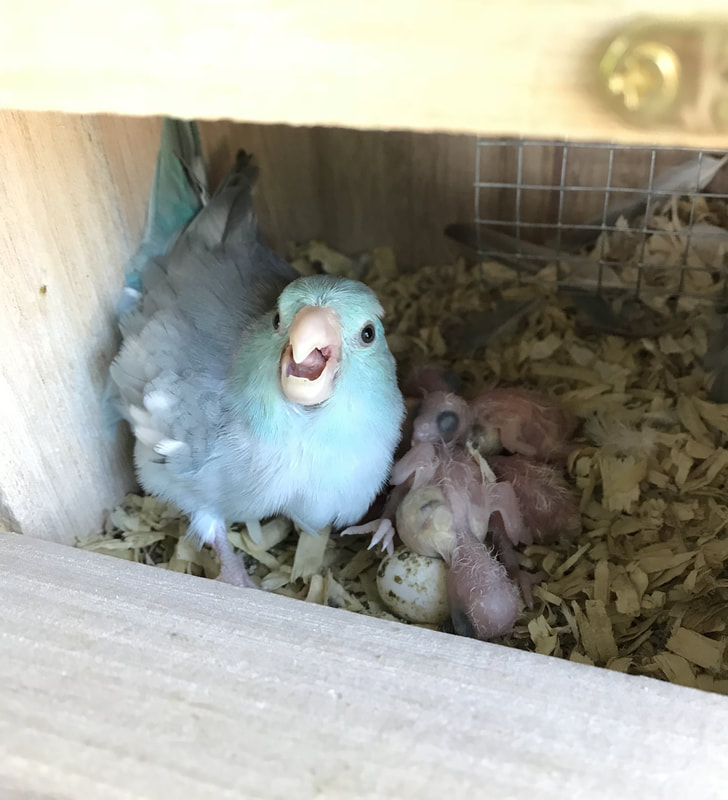 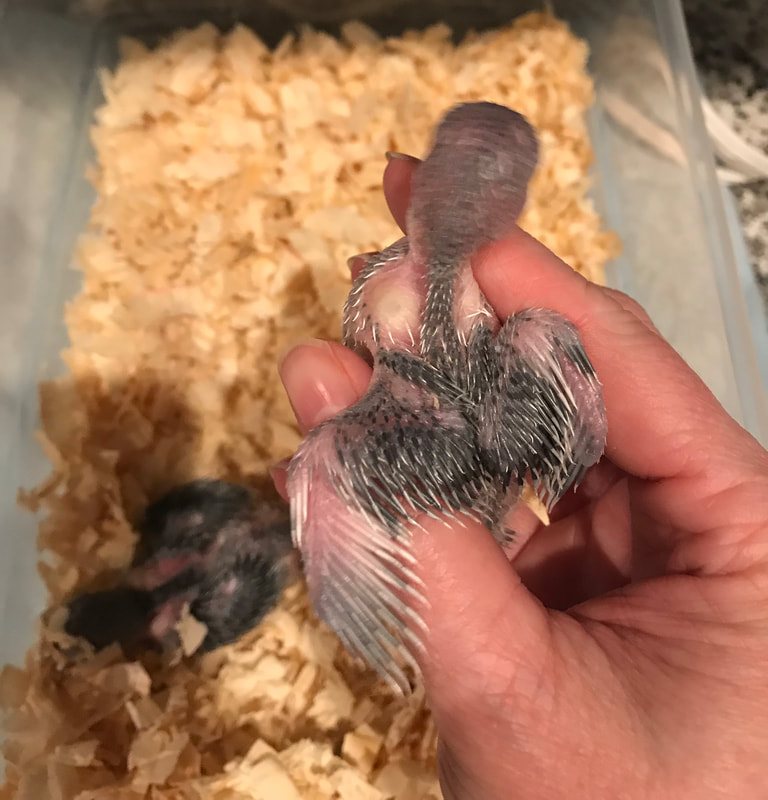 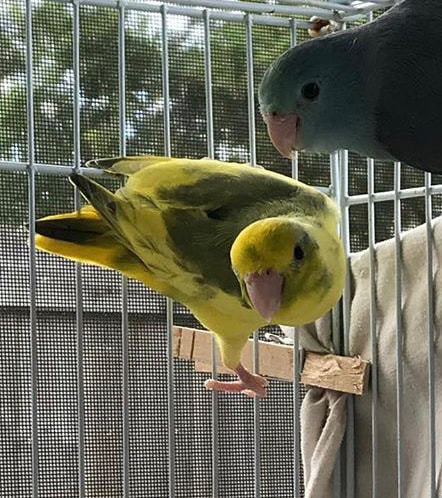 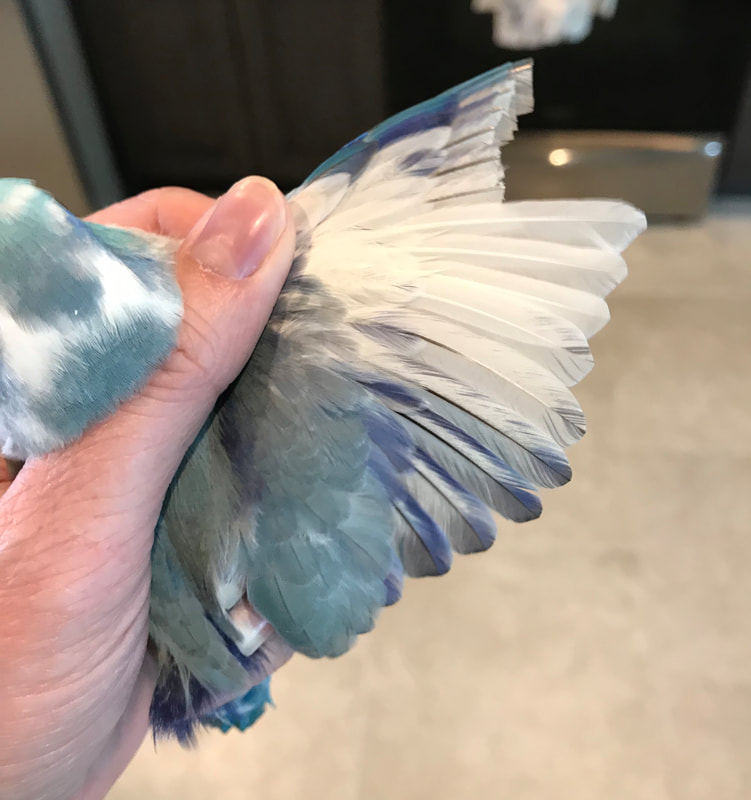 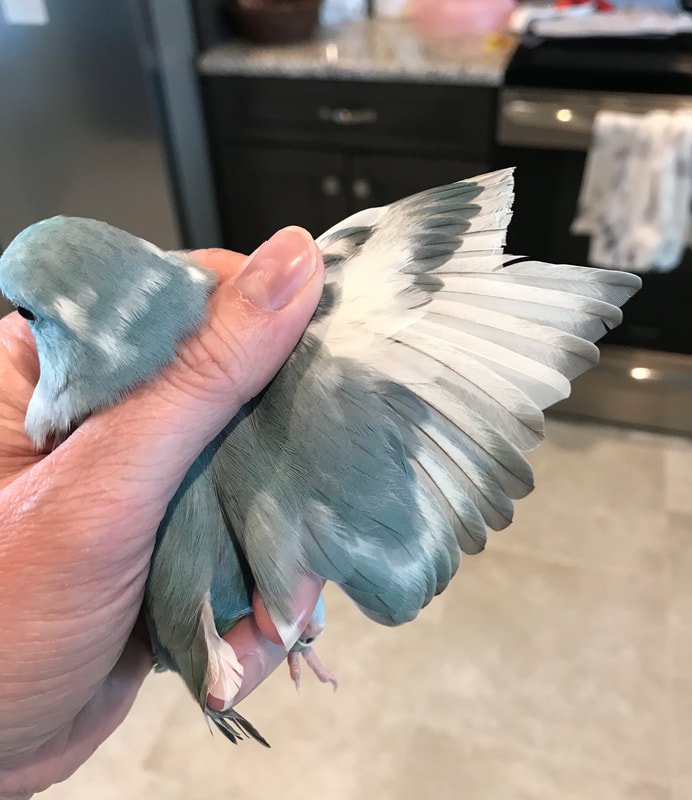 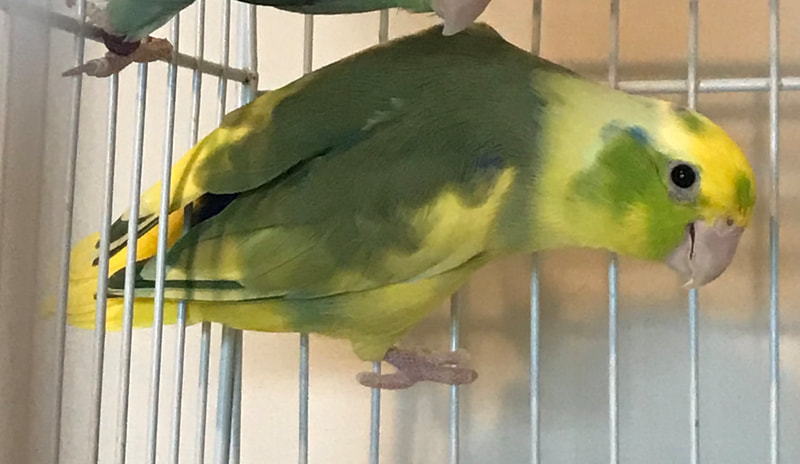 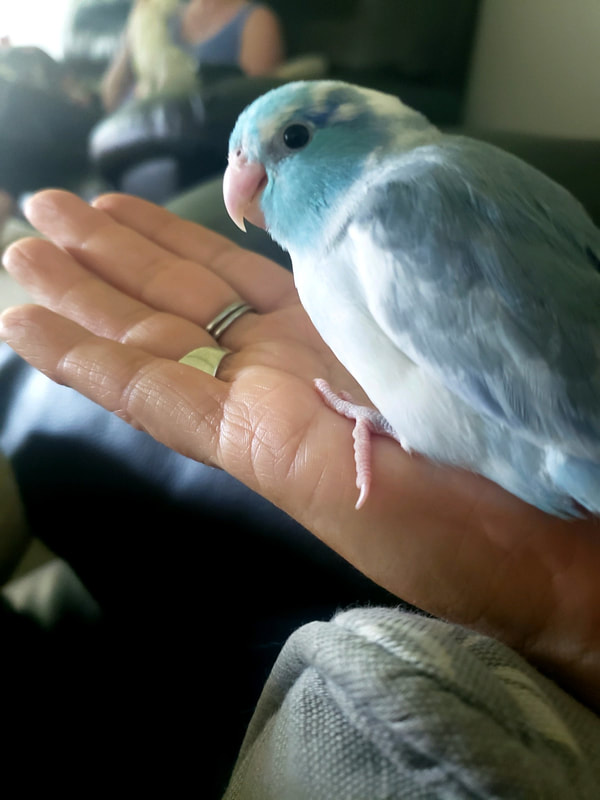 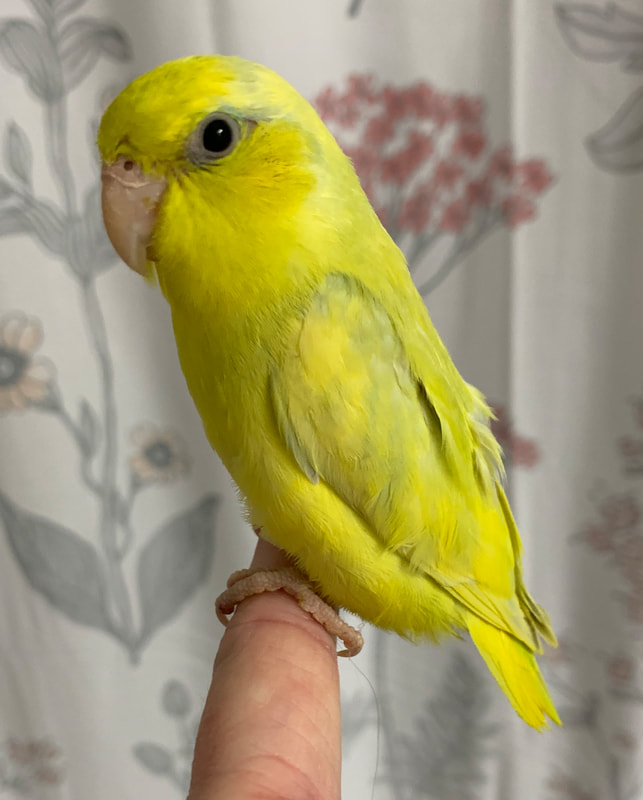 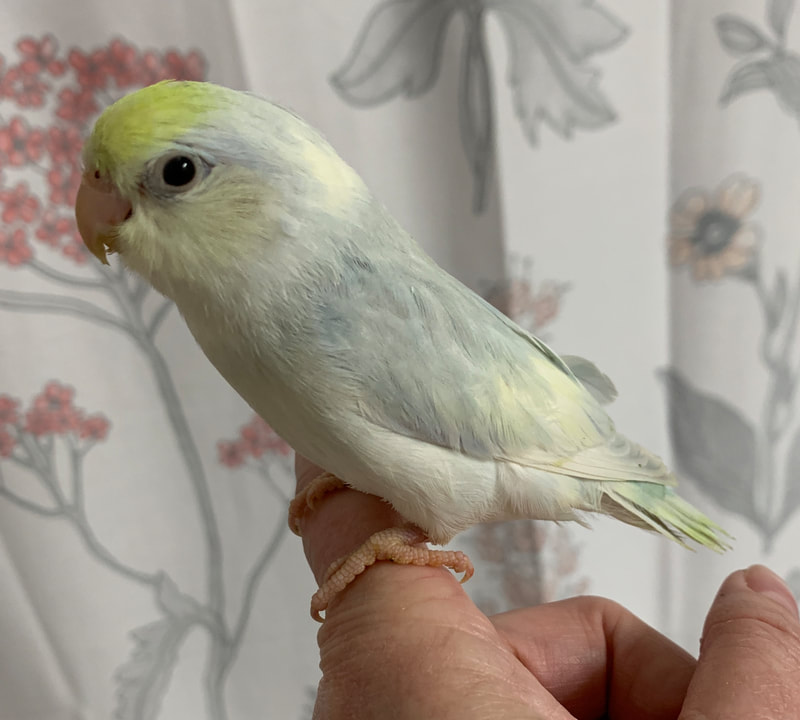 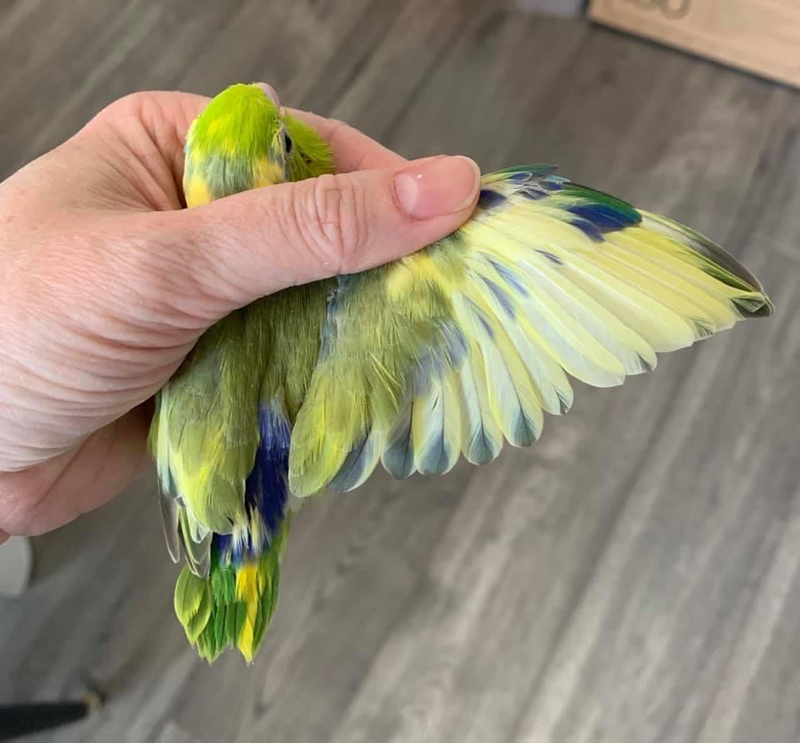 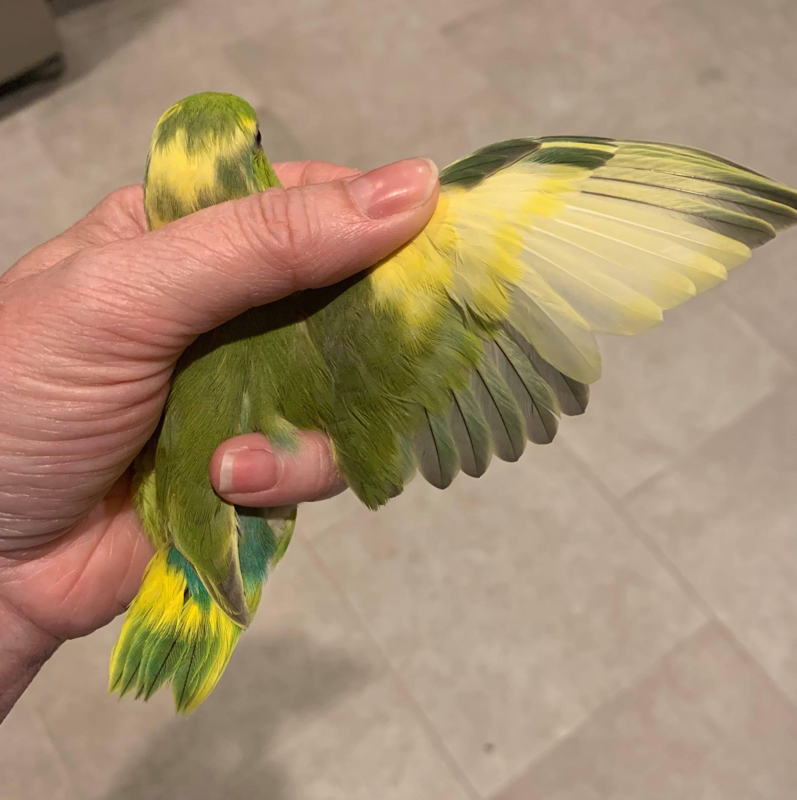 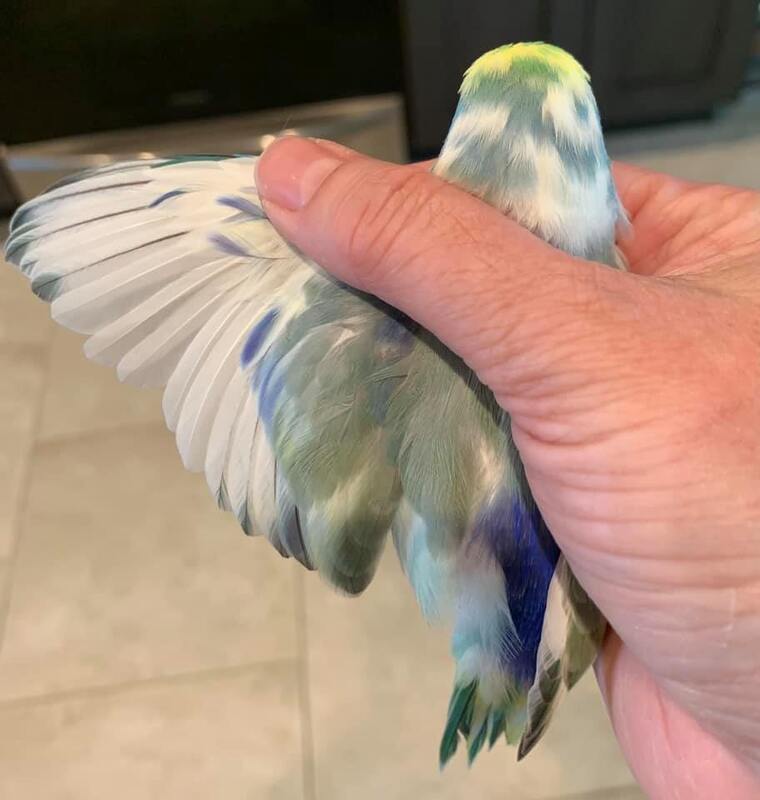 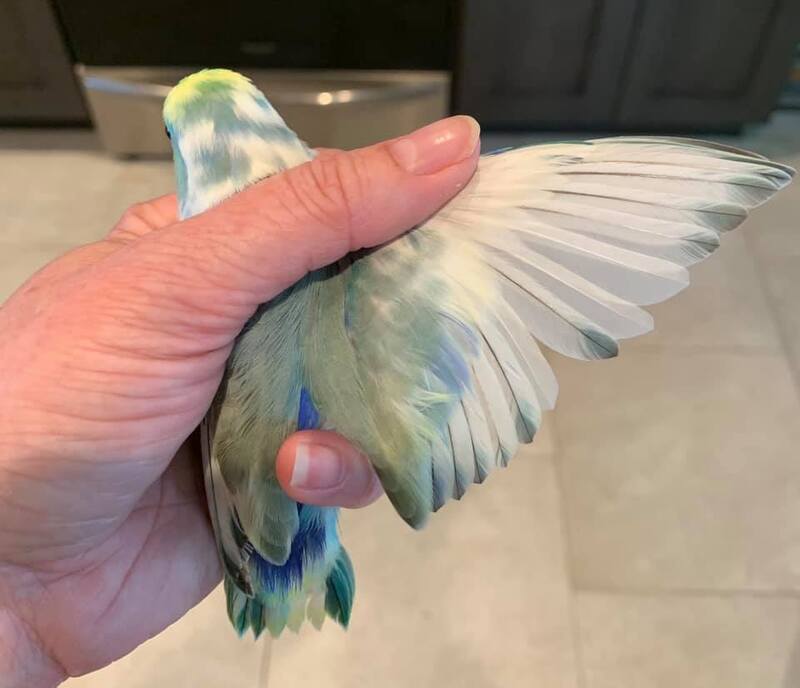 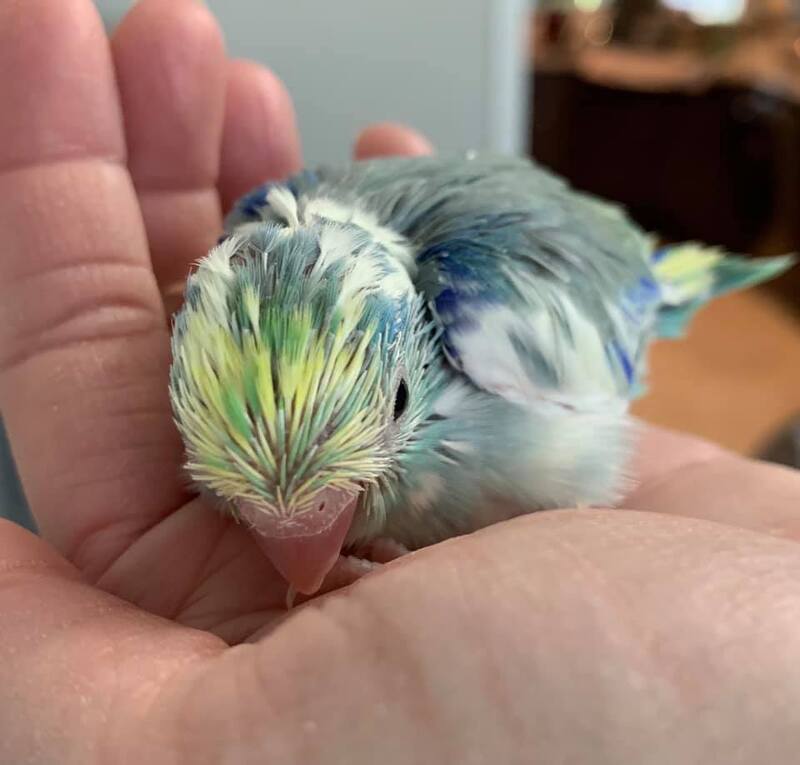 Marble is an autosomal recessive gene that was previously referred to as "Pastel." Marble is a eumelanin mutation that results in the appearance of 'edging' on the covert and primary feathers. The reason the edging occurs is because the reduction of the eumelanin is happening mainly in the center of the feather. The left-over/concentration of eumelanin in the outer edges of the feathers is what creates the 'edged' or marbled appearance.
It's not consistent, though, meaning one bird may have a 30% reduction in eumelanin while the next may have a 60% reduction! This means that not all marble birds look alike, and some have very beautiful a striking marble patterns, while others simply appear to have a color washed look to them. The degree and quality of the marble pattern often affects the price - with well marbled birds ranging anywhere from $300-$600.
Marble birds can be a little tricky to sex - that eumelanin reduction can bring out a lot of blue coloration in females that can give the appearance of them possibly being male. I've included some comparison photos in the gallery below that show the difference between males and females. **TIP: Use the Flash on your camera/phone to make the dimorphic feathers on the males pop to aid with identification**

Fallow is an autosomal recessive gene that results in a red-eyed bird. The Fallow gene is not to be confused with the Ino gene, as both produce red-eyed birds, but the Fallow gene does not have the same melanin impact on the body feathers as Ino. Visually Fallow birds should never be paired together. Always pair Fallow to non-red eyed birds, and never pair birds that carry Fallow with birds that carry Ino.

Ino is a autosomal recessive red-eye gene that results in either Albino, Lutino or Creamino birds. While Fallow birds also have red eyes, the Fallow gene does not affect the color pathways of the birds in the same way. The Ino gene behaves the way most people are accustomed as far as red-eye genes are concerned, where the melanin production of the bird is completely incapacitated. Ino birds should never be paired together. Always pair Ino to non-red eyed birds, and never pair birds that carry Ino with birds that carry Fallow.

A green bodied (or American Yellow bodied) bird that inherits two copies of Ino gene results in what is called "Lutino" - a yellow bird with red eyes. Male lutinos will typically have white primary feathers, where females will be a very rich vibrant yellow all over. ​
The picture below is an excellent representation of the difference you'll see in Lutino babies compared to American Yellow babies. The American Yellow babies look almost greenish yellow in comparison! 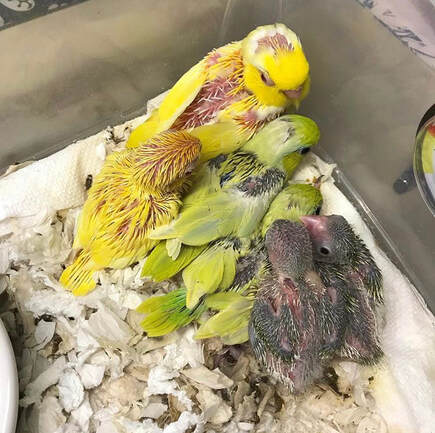 Albino birds are the result of a blue bodied bird inheriting two copies of the recessive Ino gene. You can often sex these birds by shining a blacklight across the feathers to indicate the "primary" feathers of the male, but if you want to be absolutely certain, you would need DNA sexing to confirm sex.

Creamino birds are the result of a turquoise bodied bird inheriting two copies of the recessive Ino gene. You can generally identify Creamino males the same way you would Lutino, where the primary flight feathers are a discernible white color. These are some of the more complicated birds to produce, and often carry a higher price tag as a result.