Kakarikis come in several different mutations. This page discusses some of the most common mutations that are available in the United States. There are several that are only in Europe and/or Australia.

The most common species kept in captivity in the US is the Red-Fronted Kakariki (also called the Red-Fronted Parakeet). The normal coloration is a bright green body with blue primary covert feathers, and a red forehead and eye stripe. The beak and legs are dark gray. Males and females do not differ in coloration, but males are typically larger overall and can be identified by having a larger more robust beak. 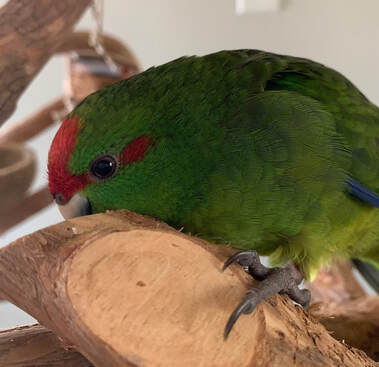 Cinnamon is a sex-linked recessive mutation that reduces the eumelanin (brown pigment) in the feathers. In a Green series bird, this creates a dusty green color and also causes the normally bright blue coverts to turn into a pale misty blue color instead. When a bird is Cinnamon and also genetically Turquoise, the bird becomes a pale/pastel turquoise color. Cinnamon Kakarikis usually have pale pinky-cream colored legs and feet. Cinnamons can be easily identified at hatching because they will have plum colored eyes. These are not to be confused with Fallow, which would be bright red at hatching.

Turquoise is an autosomal recessive mutation that results in the birds inability to produce yellow pigment. The resultant bird appears blue as a result (Blue + Yellow = Green). The red on the crown and eye stripe is not fully affected and appears as a Salmon color instead. You will often see this color incorrectly referred to as blue or even aqua, but it is actually ParBlue (more colloquially referred to as Turquoise).

Kakarikis have two standard forms of pied (there is technically a third, but it has only very recently been introduced to the US). In green pieds, the pied feathers are yellow, and in turquoise pied, they are cream or white.

In a Dominant Pied bird you will usually see pied feathers in the tail, the primary flight feathers, and/or the throat and nape of the neck.  Pied birds can have as few as one pied feather. If a bird has even a single pied feather, the bird is considered pied. You can usually determine a dominant pied bird even if it has no pied feathers by looking at its feet. This is because generally speaking dominant pied birds will also have pied patterning (pink areas) on their normally gray feet (this is of course with the exception of Cinnamon birds which will always have pinkish cream colored legs and feet).

Recessive pieds differ mostly in the patterning, usually having much more coverage of the body as far as the pied areas are concerned, and will have a dark iris compared to wild-type or dominant pieds.

It is important to note that when it comes to the iris color, this will be determined at maturation. Nestling and Fledgling Kakarikis will always appear to have dark eyes (unless fallow or cinnamon where the eye is plum or red). The color of the iris changes with maturation which can be seen below.

With the importation of the Edged (Colloquially called Spangle) gene from Europe, Mottle appears to have been introduced into aviculture in the US as well. Mottles are a variation of pied. According to literature, these birds will become progressively more pied with each molt. The patterning is more splotchy. It reminds me a lot of Appaloosa markings on horses as far as the way the pied markings appear on the body. This gene appears to be dominant.

Yellow Kakarikis are actually the result of combining Dominant and Recessive pied. What this means is that there isn't a singular 'yellow' mutation gene responsible. This can be shown by pairing a Yellow to a wild-type green bird. The resultant offspring will all be dominant pied split to recessive pied. You can basically think of Goldchecks as birds that are so heavily pied little of the base body color remains. In the image below you can see a small patch of Green color retained in the mantle of this bird. The areas that appear to retain color most often in heavy pied birds is the mantle area, and right behind the eye. There are several different names floating around, but to stay true to Euro nomenclature guidelines, the correct term would be 'DEC' or Dark-Eyed Clear.

A Cream Kakariki is a bird that is Yellow Goldcheck (DEC Green) but genetically Turquoise. Instead of appearing yellow, the bird appears cream instead (remember, a pied Turquoise or pied Cinnamon Turquoise has Cream/White pied feathers). There is no such thing as 'split to cream' as a result. A cream bird paired to a normal, wild type green would produce Dominant Green Pieds split to Recessive Pied and Turquoise.

Edged/Spangle is a newly imported mutation that causes an edged/scalloping affect on the feathers. It is autosomal recessive and can appear on any base color as well as along with pied. The correct term is Edged, but colloquially you will see Spangle more commonly used. Edged/Spangle is the same type of mutation that results in Marble Parrotlets. It's a eumelanin mutation that reduces the amount of eumelanin present in the feather center/core. That means that the eumelanin left is concentrated in the feather edge producing a scalloped appearance. It's worth noting that Edged originated in Yellow Fronted Kakarikis and is a transmutated gene in Red Fronts as the result of hybridization in the beginning. Some birds will display higher level of hybrid characteristics, and the best way to prevent this is by outcrossing the spangle birds to US bred red fronted lines.

Misty is an incomplete dominant mutation that in green birds produces a bronzed-green looking color, and in Turquoise produces a dusty Turquoise to almost grey coloration. These birds have been incorrectly sold in the US as Dark Factor. After sending several photos of my birds to Johan Kortenray - a well respected Dutch breeder - he has confirmed that these birds are actually Misty. There is no evidence as of yet that Dark Factor exists in Kakarikis. It is also incorrect to call these birds 'olive' or 'gray.' The correct term is misty.

Fallow are red-eye mutations in Kakarikis, not to be confused with Ino. To date, there is no confirmed Ino mutation in Kakarikis, at least not in the United States. In Fallow Green birds, the body of the bird takes on a similar coloration to Cinnamon Greens, with a dustier appearance and a bright red eye. The same goes for Turquoise Fallows which appear very similar to Cinnamon Turquoise birds, again with the bright red eye. Then there are Cream Fallows which look like a brighter version of a Cream Kakariki with a red eye. What we see most are Goldcheck Fallows which are what are often incorrectly called "Lutino." It is very easy to tell a Fallow Goldcheck from a Normal, because in a normal Goldcheck the eye will be completely black, and in a Fallow it will be a very noticeable red, especially in the light. In babies, the eyes are noticeably red in the nest - there is no confusing them with Cinnamon eyes which are more distinctly dark plum colored.
As with red eye mutations in other species, Fallow Kakarikis should NEVER be bred together to avoid issues with blindness and eye defects. The best choice in terms of health and vitality of the offspring if breeding is to pair two splits together. 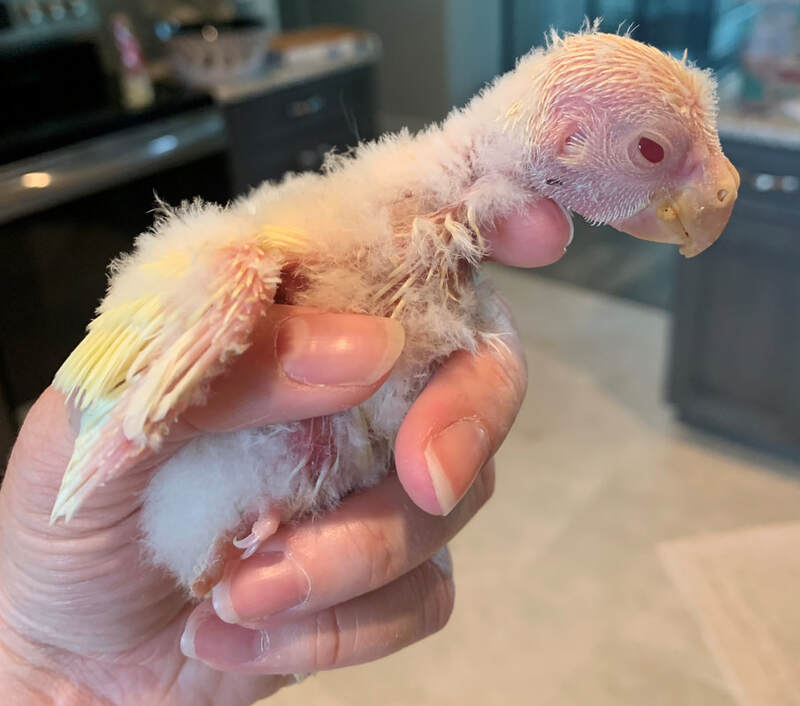 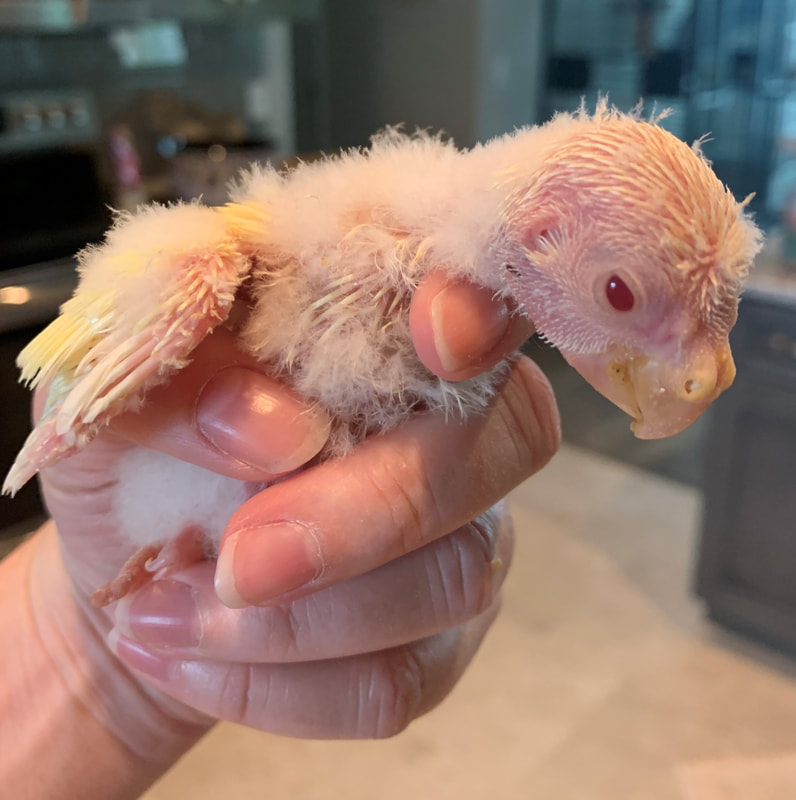 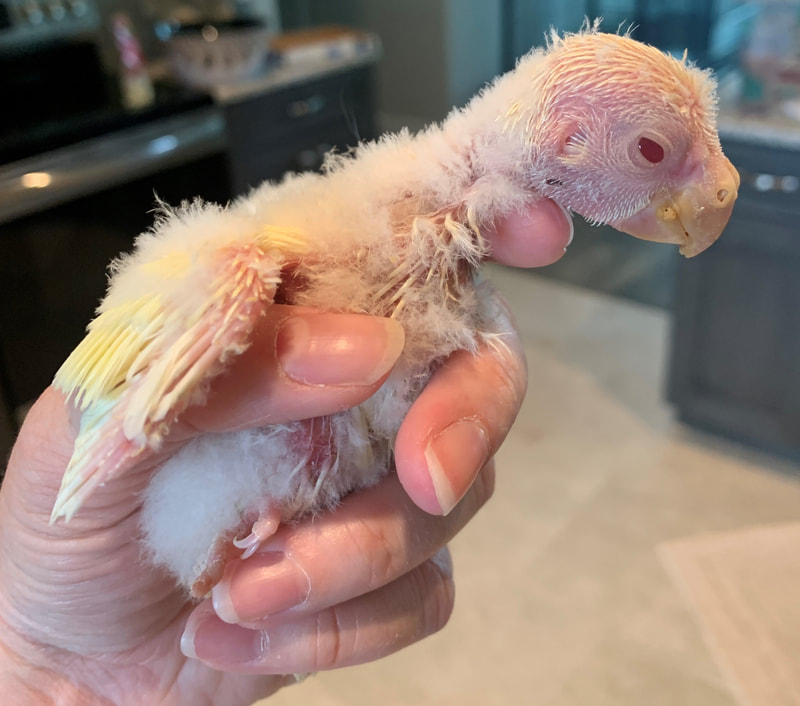