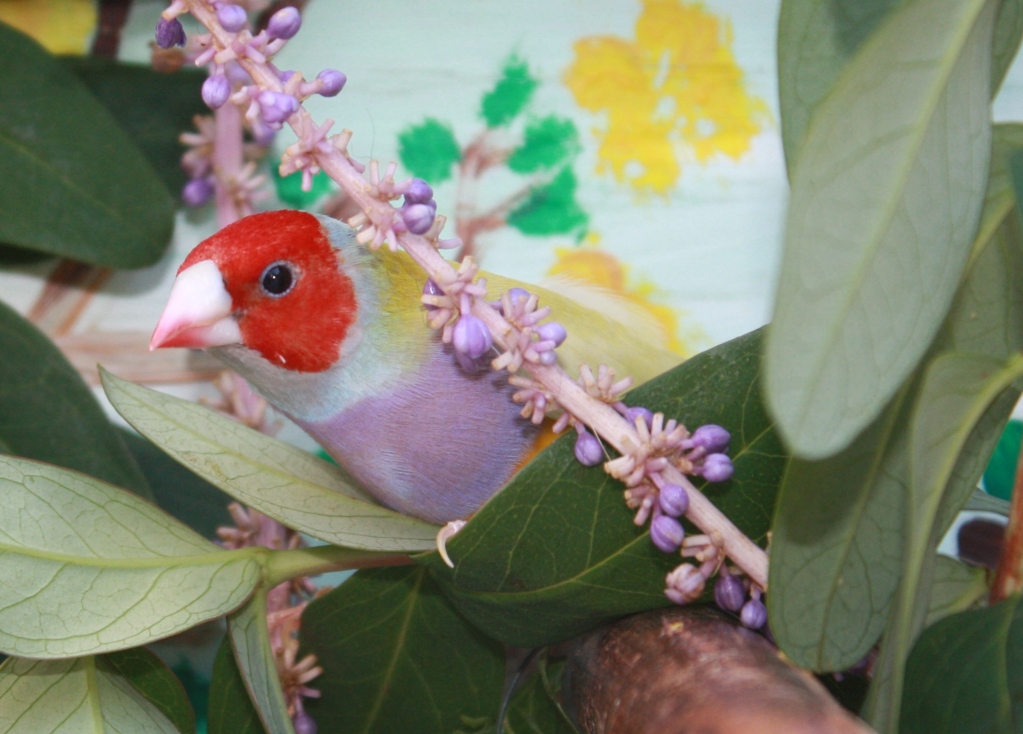 If you've made it this far, you must have grasped the basic concepts of Gouldian genetics thus far. Now you're probably asking - "What else is there to know? Why/How do the genetics work the way they do? What is the deeper explanation?" Hopefully I can paint a better picture on this page of how the colors actually work to produce the gouldian mutations existing today.

First - let's try to understand the different pigments that make up the color present on the Gouldian's body to begin with.

The four pigmented colors (Red, Reddish-Brown, Yellow, and Black) are categorized into two varieties:
I: Carotenoids
II: Melanins
In describing the mutations that exist today, what it boils down to is the manipulation of the bird's ability to express these different pigment groups. We are altering the way a normal bird can express color - not creating new color components themselves.

The Different Body Color Mutations, and How They Were Derived

By limiting a bird's ability to produce or display certain color blocks, we have created a wide range of body and breast colors that were not seen in the wild type gouldian.

Birds that lack eumelanin (black pigment) are SF Pastel Green (Dilute) bodied birds. However, because Dilute bodied birds only have one copy of the pastel gene, which is co-dominant, the remaining genes responsible for wild type body color can still express a portion of dark coloration, leaving the black normally present on birds as a dull grey or smoky color instead. If the cock is DF Pastel Green, it can't produce any eumelanin at all, and this is why the black on these birds appears off-white or cream colored. The exception is SF Cocks who are also white breasted. The exact explanation for this is not fully understood, but it suggests some sort of relationship between breast and body color inheritance. White breast is due to the inability to produce either melanins - so it stands to reason that perhaps a yellow bird with a white breast has a difficult time producing ANY melanins, and thus appears yellow all over.

A bird that only lacks Canthaxanthin (red pigmentation) results in a Yellow head bird.
Below we break down the various body colors and what is happening on the pigment/color structure level with the genetics.
An easy way to look at body color, for me, is to think of a color palette. Many of you may remember from childhood art classes that Blue + Yellow = Green. This is essentially what a Normal gouldian is. Structural Blue plus (really a combination) Yellow = Green. Delete one or the other, and you can only produce the constituent parts.

Yellow Body - Eumelanin and Phaeomelanin both can not be produced. The structural blue color in the feathers is dependent upon eumelanin, and since this can not be produced due to the pastel gene, the resultant bird appears to us as visually yellow. In other words, the ordinally green body color is "erased" because the structural blue is inhibited.
Yellow - (Blue) = Yellow

Blue Body - Neither carotenoid colors (lutein or canthaxanthin) can be produced, creating a blue bodied bird by default. Remember - blue body color is not produced by food synthesis, it is purely the result of feather structure. This explains why genetically red head blue bodied birds do not fully express the red head color (although why it is not completely subdued I am not sure) but instead appear anywhere from salmon to beige in color.
Blue - (Yellow) = Blue

Silver Body - we have an interesting situation. We are essentially combining the characteristics of a yellow bird with those of a blue bird. This results in a bird that is not able to produce either melanin or carotenoids. No melanins mean no black, and no carotenoids mean no red or yellow. However, the yellow prevents the structural blue from showing up as well - so we're left with a bird that is hardly capable of producing any color at all and appears as off-white or silvery in coloration.
- (Yellow) - (Blue) = Silver

Because head and breast colors are, for the most part, inherited independently - these are not affected and remain untouched unless controlled by selective breeding. E.g., in order to produce an "all-white" bird, one would need to selectively produce a Black Head, White Breast, silver bird. We know that yellow prevents the expression of the eumelanin responsible for the black head, and below you will see that the lack of either melanins is what results in a white breasted bird.

Breast Color:
Breast colors lack carotenoid colors and are essentially the result of combining the melanins with the Structural blue color. It is thought that the different breast colors occur via the following combinations or lack of melanins:
Eumelanin + Phaeomelanin = Purple Breast
Eumelanin only = Lilac Breast
Phaeomelanin only = Blue Breast (speculation; most Blue Breasts are thought to also be the result of melanistic birds)
Neither Eumelanin nor Phaeomelanin = White Breast
Remember - these are inherited separately from body color!